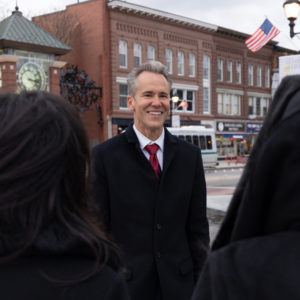 The sky was gray and snow had just begun to fall as I left Manchester on a Saturday afternoon in mid-January. The annual meeting of “The Walpole Society for Bringing to Justice Horse Thieves and Pilferers of Clothes Lines and Hen Roosts” was convening at 6:30 p.m. as it began its 205th year — and I didn’t want to miss it.

It was already dark by the time I reached the Town of Walpole, a small community nestled in the hills above the Connecticut River in Cheshire County, just east of the border with the state whose junior senator is leading in the polls in New Hampshire, even though his socialist platform of high taxes and government regulation are the antithesis of the Granite State’s “Live Free or Die” motto.

After the election of officers, a gentleman in the audience, explaining that he was new and this was his first meeting, asked if the group met more frequently throughout the year. No, the annual meeting was the only official meeting, explained newly elected President Dave Westover. “But if we hear about an increase in horse thievery, or pilfered clotheslines, we might have to call a special meeting.”

Apparently the last time the Riders of The Walpole Society for Bringing to Justice Horse Thieves and Pilferers of Clothes Lines and Hen Roosts actually recovered a stolen horse was nearly 100 years ago. But the group has endured, keeping up the New England tradition and embodying the spirit of community, self-reliance and self-governance I have seen manifest in countless ways on the campaign trail in New Hampshire since launching my campaign for president last fall.

Another tradition that has endured is the Granite State’s preeminent role in choosing American presidents, as this year marks the 100th anniversary of New Hampshire’s First In the Nation Primary. Far more worrisome than horse thievery and pilfered clotheslines is the fact that we are allowing our traditions of democracy, national unity and common decency to be stolen from us by the current occupant of the White House.

In conversations with citizens in diners, community forums, Rotary Clubs and Republican committee meetings over the past few months, I hear common themes. Granite Staters are tired of the president’s divisive rhetoric and toxic tweets. They are troubled by his lack of character, bothered by his broken promises, and worried about the kind of America they are leaving for their children and grandchildren. They feel the Party of Abraham Lincoln is abandoning the values it once held, and needs to be guided back to its principles of compassionate conservatism and legacy of defending civil rights, protecting the environment, fiscal discipline and personal responsibility.

Tax breaks have benefited the rich while the working class suffers. Totalitarian leaders have been embraced and allies abandoned. We have failed to address the serious threat of climate change. We were promised budget deficits would be eliminated, but the deficit increased every single year of the Trump administration; last year it exceeded $1 trillion, and this year will top $1.1 trillion. The Walpole “Horse Thieves” Society’s ability to live within its means while assessing only lifetime dues of $2 stands in stark contrast to the federal government’s wasteful spending and massive expansion of debt over the past three years.

A president should provide leadership on the most pressing issues of the day, helping ensure the state of our Union remains strong and our traditions of democracy are protected. A president should reflect the best of America’s values. Voters of the Granite State have not only the opportunity but the obligation to send a message to a divisive and self-centered president that he is failing our country.

I’m Matt Matern. I’ve spent my career standing up to bullies, advocating for working families, and supporting efforts in my community that serve the homeless and protect our environment. I believe American greatness comes from empowering working Americans and the middle class. I’m running to raise my voice in protest and give voters the chance to cast their ballot for a Republican candidate they can be proud of.

Join me, and send a message of no-confidence in this president with your vote in the First in The Nation Primary.