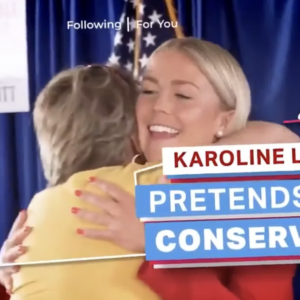 Leavitt, who just turned 25 and legally eligible to serve in Congress last month, has been gaining in the polls recently on presumed frontrunner Matt Mowers. She has had considerable fundraising success and received the endorsement of several nationally-known Republicans including her former boss, Rep. Elise Stefanik (R-N.Y.).

The ad, released by the Defending Main Street super PAC, takes direct aim at Leavitt’s age, showing a video clip of a Leavitt saying “Listen up, hoe bag” into a camera phone, with the narrator adding, “She wants to bring her generation’s new vision to Congress. You know, mooching off her parents, [and] running up huge credit card debt.”

The spot concludes with, “Woke, immature and irresponsible Karoline.”

Leavitt sent a statement early Thursday, hitting email boxes before virtually anyone had seen the ad.

“The same Super PAC running negative ads personally attacking me is the same group who supported the weak Republicans that voted to impeach President Trump, so it’s no surprise they are spending millions to help Matt Mowers get to Washington,” Leavitt said.

“Frankly, I am honored the DC Swamp is attacking me with these desperate personal smears because it means they know that I am the true conservative outsider in this race. They cannot buy this seat, and our grassroots movement will prevail on September 13th.”

If by “DC Swamp,” Leavitt means more establishment Republicans, she may be on to something. Defending Main Street has participated in GOP primaries working to defeat candidates considered extreme by many within its party. For example, it spent $100,000 in the 2020 Iowa GOP primary to help defeat Rep. Steve King, who was best known for defending white nationalism.

“It’s not about the ideas. It became about the person,” said Sarah Chamberlain with DMS.

Asked about her organization’s participation in the NH-01 primary, Chamberlain told NHJournal, “We try to elect ‘Main Street’ Republicans who are conservatives and want to move this country forward.”

The ad has caught the attention of the political press.

“I think this is the first time I’ve ever heard the phrase ‘ho bag’ in a campaign commercial,” tweeted Axios senior political correspondent Josh Kraushaar.