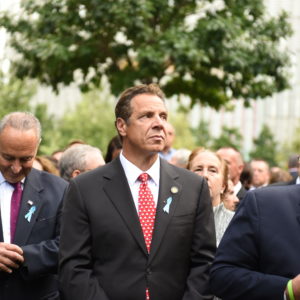 I think character matters when it comes to our elected officials. I also think we don’t have to wait for an election season to point out concerns about the character of someone who is most likely going to be asking for our votes starting in the next year.

Yes, believe it or not, we can start seeing some presidential wannabes entering New Hampshire within the next year to lay the groundwork for a 2020 challenge to the Trump administration so, saddle up!

They’ll go to the Granite State for party dinners and to campaign for 2018 candidates, using the opportunity to up their own profiles in arguably the most significant state in the primary process. With a Republican in the Corner Office, a majority, if not all, of our aspiring  “visitors” will be Democrats, and I’ve started to look at how that field may come together.

One such potential candidate is New York Gov. Andrew Cuomo. I have an interesting perspective on New York governor, having worked for political organizations for former Republican New York Gov. George Pataki on and off for nearly a dozen years. Possibly unfair to any other New York governor, I set my standards by my former boss, and it’s a pretty high bar when it comes to that character I mentioned at the start.

There’s an ongoing beef in New York between the Seneca Nation and its tribal casinos and Gov. Cuomo. Here’s the Cliff-Note version of the dispute: For 14 years, the Seneca Nation has operated three casinos in western New York, providing 25 percent of its slot machine revenue to the state and local communities the casinos are based in.  Seneca Nation says the agreement ended December 2016, so it stopped making the payments. Cuomo says, no, it still has to pay, so the issue is now in arbitration.

I’m not here to argue for or against what the legality in this “compact” is, but quite frankly, Cuomo has been oddly flippant toward this situation from day one — even threatening the Senecas that he would open up a competing casino in Niagara Falls if they didn’t pay up. Isn’t that, like, extortion?

He was supposed to meet with the Seneca president to try to work things out, but canceled it last minute and subsequently demanded the issue go to arbitration instead. Then, last week, a New York reporter tried to ask the “not-taking-questions governor” what he was going to do about the fact Niagara Falls has now lost revenue and is struggling and he … laughed … and then made some flippant comment about how Niagara Falls can pay “him” because he lost revenue too.

It’s important to note none of it is actually “his” money, but, we know some politicians think that way. I’d like to also point out, casino revenue across New York is down, thanks to a “get rich quick” approach by Cuomo for the state coffers, pushing a few years ago for more casinos to open in New York because, MONEY!

With all the analysis we have done in New Hampshire over the casino issue, we learned that more casinos wouldn’t mean more money, it simply means more casinos compete for the same pool of money. Cuomo apparently either didn’t have the foresight to realize that, or was simply so busy looking for money to spend, he developed competition within his own pool, and now previously existing casinos’ revenue is down, and the new ones are coming in way below expectations.

What’s my point and why should New Hampshire care?

Because, there is a strong possibility that in the very near future, Cuomo is going to come to the Granite State and begin to tell Democratic voters why he should be handed the responsibility of not just one state he mismanaged, but the entire nation. Why he should be entrusted with the people of New Hampshire and the rest of the country when he is willing to mock his own constituents’ struggles and threaten to extort his own state’s businesses for more money.

If he’s willing to do that in Albany, imagine what he would do with the reigns in Washington.  Saddle Up, the #FITN will be riding in soon!