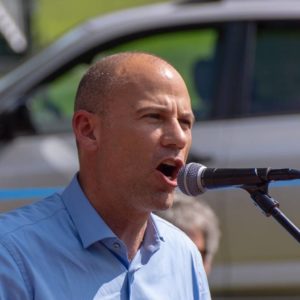 The man who has styled himself as the fighter Democrats need for a throwdown against Donald Trump in 2020 has been charged with committing actual violence, according to multiple media reports.

The folks at TMZ are reporting that Avenatti was arrested Wednesday after a woman filed a felony DV report. They claim they were told her face was “swollen and bruised” with “red marks” on both cheeks. TMZ is also reporting that “the LAPD has already obtained an emergency protective order, prohibiting Avenatti from going near the alleged victim.”

While Avenatti denies this charge, he’s made no secret of his fondness for fisticuffs. He has issued a challenge to Donald Trump Jr. to join him in an MMA-style fight for charity, and often uses violent language regarding the president. For example, Avenatti recently claimed that President Trump hasn’t engaged him on Twitter because “He knows that I’ll hand him his ass,” Avenatti said.

Michael Avenatti works the crowd at a NH Democratic fundraiser.

In an August interview, Avenatti told NHJournal that running against Trump “is going to be a cage match,” and that he was uniquely qualified to take the president on. “Democrats have lots of talent but not a lot of fighters,” he told NHJournal.com.

Avenatti has made at least four stops in New Hampshire in the past few months, where he was warmly received by Granite State Democrats  He was scheduled to appear in Vermont this Friday and Saturday, but those appearances have been cancelled and tickets are being refunded by the Vermont Democratic Party.

He’s also scheduled to appear at an event for the Upper Valley Democrats of New Hampshire in the near future. No word on the status of that event.